The Paradox of Sex, Magical Thinking, and Accidental Pregnancy in This Age of Contraception

Most unplanned pregnancies—seven out of ten—occur to single women in their twenties or thirties, and most have at least high school or some college education. These women are our sisters, friends, colleagues, neighbors, extended family. They are not strangers.

[pullquote align=”full” cite=”Carol Cassell” link=”” color=”#e15f5e” class=”” size=”17″]“My hope in writing this book is to jump-start a serious national discussion among people—who haven’t been engaged so far—about the causes and the far-reaching consequences of unintended pregnancies—one which includes a resolute will to actually do something to prevent more Knocked Up pregnancies and has a reasonable chance to work.” [/pullquote]

Why Knocked Up? The Paradox of Sex, Magical Thinking, and Accidental Pregnancy in This Age of Contraception

[pullquote align=”full” cite=”Marty Klein, PhD” link=”” color=”#999999″ class=”” size=”17″]A valuable, enjoyable read… While the book will make you think (and occasionally laugh), it won’t leave you depressed—rather, it will make you want to talk to your friends about a subject that touches absolutely everyone. [/pullquote]

[pullquote align=”full” cite=”Douglas Braun-Harvey, The Harvey Institute” link=”” color=”#999999″ class=”” size=”16″]An excellent book…well-cited references… If you are interested in a relevant contemporary source about why after 50 years of amazing medical advances in contraception half of pregnancies in the United States are unplanned… this is the book for you.[/pullquote]

[pullquote align=”full” cite=”Elizabeth Rae Larson ” link=”” color=”#999999″ class=”” size=”17″]A book for every thinking American… Carol Cassell spends most of the book illustrating the seriousness, economically and socially, of the problem of unwanted children. She is a wizard at interpreting social and health science data and weaving a coherent narrative that illuminates our current situation and its causes. But it is her last chapter that was a gold mine for me. It identified an amazing list of already-in-existence resources and strategies for bringing healthy reproduction practices closer to realization for more people. Full of organization names and websites…a great boon for health care activists.[/pullquote]

“I didn’t think it would happen to me.” 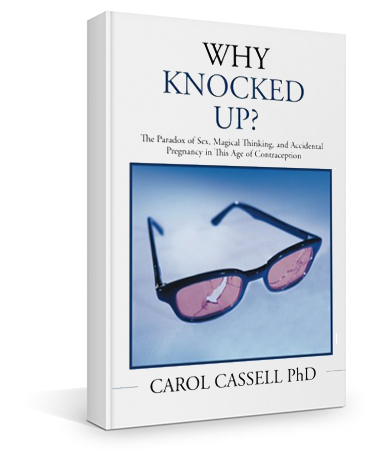 Peeling back the layers of conflict, denial, and dreams about sex and love, this provocative book reveals why millions of women say an unwanted pregnancy “just happened.” First of all, a majority of women will spend approximately five years pregnant, postpartum or trying to have a child, but thirty years–more than three-quarters of her reproductive life—trying to prevent a pregnancy. That is a long time to be vigilant about not getting Knocked Up. As a result, one out of two women will have at least one unintended pregnancy in her life.

Why do so many women still say that they didn’t plan on getting pregnant, explaining that “it just happened?” Why—despite great strides made in available contraceptives—does the U.S. have the highest rate of unintentional pregnancy among industrialized nations, including Italy and Spain?

To bring a fresh perspective to the table, Cassell blends her own research findings with those of psychologists, anthropologists, political scientists, and other reproductive health researchers, to draw a map of the cultural and political forces driving accidental and unwanted pregnancy. She then explores the terrain of Far-Right political/ religious extremists and their influence on our fundamental lack of sexual intelligence and misunderstandings about contraception, and thus, in our capacity to avoid an unintended pregnancy. Throughout this landmark book, Why Knocked Up?, Cassell presents a strong sense of empathy for the women and men who have faced the dilemma of an unintentional pregnancy and points the way forward to reducing the risk of unplanned parenthood or abortion. In a stunning final chapter, Cassell optimistically illustrates the many ways which we can adapt to prevent at best, or at least reduce, Knocked Up pregnancy.

To bring a fresh perspective to understanding the magnitude of the crisis, Carol Cassell uniquely blends her own research with those of psychologists, anthropologists, political scientists, and other reproductive health researchers, to draw a map of the personal, cultural, and political forces driving unintended pregnancy. She illustrates how our hypocritical, quirky sexual norms lead to magical thinking about sex—combined with the far-right’s efforts to block affordable contraception, sex education, and abortion—actually escalates unintended pregnancy. Cassell then shows how the ramifications of Knocked Up pregnancy—our high rates of abortion and untold numbers of fragile families—are directly connected to our dismal lack of intelligence about sex and misunderstandings about contraception.

Given the consequences of so many unintended pregnancies, it should be front and center of our country’s social and economic concerns, but it isn’t. A major barrier to acknowledging accidental pregnancy is a serious issue is that Knocked Up pregnancies are treated like a Black Elephant—a cross between a “black swan” (an unexpected event although it was eminently predictable) and an “elephant in the room” (a problem no one wants to admit is there). As a result of turning that blind eye, the U.S. has the highest rate of unintentional pregnancy among all industrialized nations, including Italy and Spain. Despite the challenges, Cassell delivers a powerful argument as to why unwanted pregnancy merits our concern even if we aren’t directly involved: we all pay a high price dealing with the complex tangle of personal dilemmas and the economic crisis in families it creates.

While Cassell presents a strong sense of empathy for the women and men who have faced the dilemma of an unintentional pregnancy she also points the way forward to dramatically reducing the risk of unplanned parenthood or abortion. In a stunning final chapter, she assures us that reducing Knocked Up pregnancy isn’t a hopeless challenge and endorses a range of effective and edgy resolutions.

Carol Cassell Talks About How This Book Is Put Together

Why Knocked Up? is built upon a foundation of research studies and surveys drawing from sources as diverse as behavioral economics, sex education, reproductive health, family and child welfare, psychology, moral psychology, demographics, and social science. It is especially enriched from a multiplicity of insights from reproductive health practitioners, sex therapists, counselors, and educators about the inner workings of sexual risky behaviors and the real-life circumstances resulting in an unwanted pregnancy. Personal interviews with both men and women helped me clarify befuddling issues about sexual responsibility. My arguments about the roots and complications of the Knocked Up Paradox are presented in four parts. Although each part tackles different aspects of those factors, they are all inter-connected. Unlike the cheese, none stands alone.

Copyright © 2015 by Carol Cassell Ph.D. Library of Congress Control Number: Pending ISBN: Hardcover 978-1-5035-7676-6 Softcover 978-1-5035-9945-1 eBook 978-1-5035-7675-9 All rights reserved. No part of this book may be reproduced or transmitted in any form or by any means, electronic or mechanical, including photocopying, recording, or by any information storage and retrieval system, without permission in writing from the copyright owner. Available at bookstores and online at Amazon, Barnes & Noble, and XLIBRIS.com.